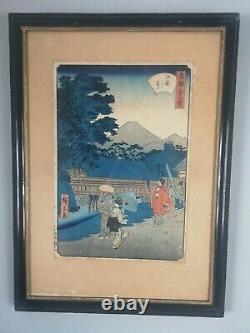 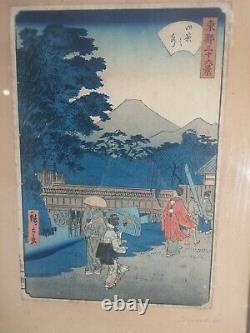 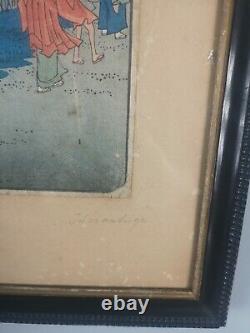 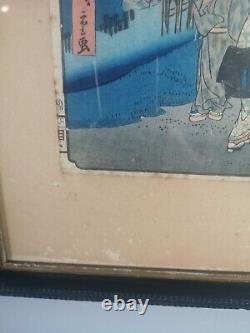 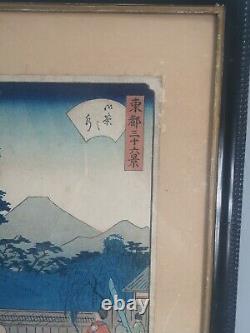 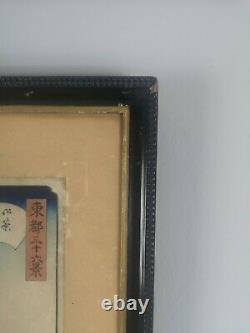 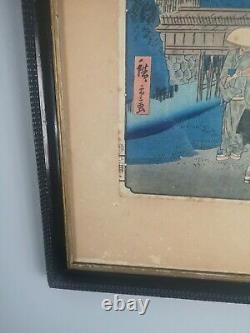 The piece is glazed and mounted in an original antique ebonised frame. Considered the last great master of the ukiyo-e genre ("pictures of the floating world"), the Japanese artist Utagawa Hiroshige (17971858) was a hugely influential figure, not only in his homeland but also on Western painting.

Towards the end of the nineteenth century, as a part of the trend in Japonism, European artists such as Monet, Whistler, and Cézanne, looked to Hiroshiges work for inspiration, and a certain Vincent van Gogh was known to paint copies of his prints. Hiroshige was born in 1797 to a samurai family in Edo (modern Tokyo). After his parents died, around the age of fourteen, Hiroshige began to take up painting and studied for several years under the artist Toyohiro. During this period he produced many works reflecting traditional ukiyo-e themes such as women and actors, but upon Toyohiro's death in 1928 he underwent a pronounced shift toward the landscapes for which he is best known today, as well as bird and flower images. His most famous series include.

Famous Views of the Eastern Capital. The Fifty-three Stations of the Tkaid. The Sixty-nine Stations of the Kisokaid. Thirty-six Views of Mount Fuji. In 1856, around the age of 60, Hiroshige "retired from the world", becoming a Buddhist monk.

Two years later he passed away (during the great Edo cholera epidemic, though it's not known if this was the cause of death) and was buried in a Zen temple in Asakusa. Just before his passing, he wrote the following poem.

I leave my brush in the East And set forth on my journey. I shall see the famous places in the Western Land.

Minor surface markings and visible foxing to print. Some scuffs and scrapes to antique frame.

All of our items are rare, antique or vintage curiosities. We are happy to reply to any queries within 24 hours. Please note we make every effort to accurately describe the condition of our items. These are usually detailed in the condition section and using photos.

Please message for a cheaper quote tailored to your destination. UK quote is for Mainland Only. Unfortunately we are unable to deliver to PO Boxes. Any such charges are your responsibility.

We aim to provide a detailed description of pieces of paintings and frames, outlining any visible damage or deformities. If you feel that an item has been misrepresented with a false description. We offer a full 14-day return guarantee on all items. Please note all items are meticulously packaged and we would expect the items to be repackaged in the same way to avoid damage in transit. Gilt Gesso Frames and Glazing. Gilt gesso frames are delicate mouldings of plaster and can be susceptible to flaking or peeling during transport. We aim to thoroughly protect all frames and glazing with high-quality packaging products and do not pass this cost onto our customers. Unfortunately, our couriers do not provide compensation for antique frames and glazing, and therefore we are also able to do so.

The item "Very Rare UTAGAWA HIROSHIGE II Ochanomizu Woodblock Print 1797-1858" is in sale since Friday, March 6, 2020. This item is in the category "Antiques\Asian/Oriental Antiques\Japanese\Prints". The seller is "rare-curious" and is located in Chelmsford , Essex. This item can be shipped worldwide.