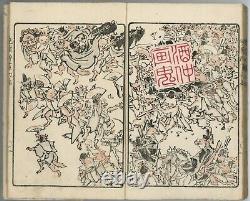 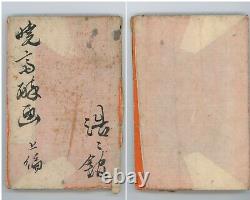 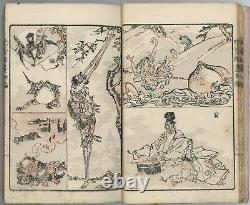 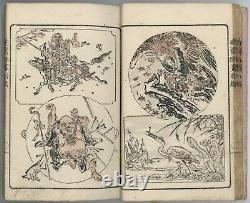 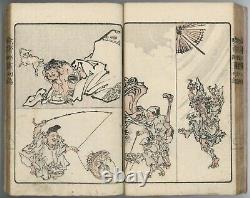 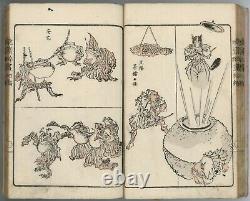 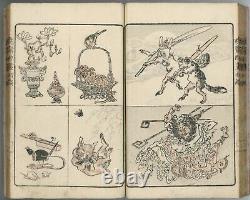 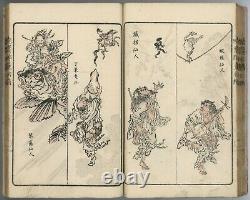 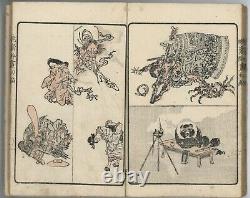 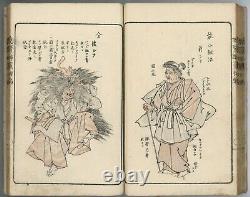 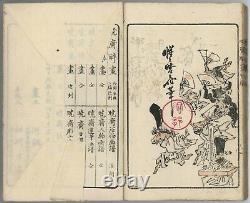 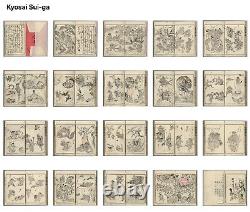 An absolutely fabulous work rarely seen on the market. Woodblock printed; ink and color on hand-made paper. Dimensions: 18 x 12 cm. COVER HAS BEEN BENEATH A PROTECTIVE WRAPPER FOR DECADES (its up to you if you wish to remove). EXCELLENT STATE OF PRESERVATION FOR THE AGE.

18.7 x 12.6 x 1 cm. Kawanabe Kyosai is considered the greatest successor of Hokusai (of whom he was not a student).

Unruly as his temperament suggests, he possessed the dignity, power, and restraint of Hokusai, with an exuberance for the fantastic and an unrivaled command of drawing. Drawn with lively, calligraphic brushwork enhanced with soft color. Kyosai depicted what appealed to him as an artist, capturing the beauty and humor of the world around. The illustrated book Kysai suiga comprises three volumes: the first was published in November 1882, the second followed in January 1884, while the third was approved on February 29, 1884, and was published posthumously on March 13, 1890. [1] Each volume exhibits distinct differences in the colors and the embossed (karazuri) crest designs on the covers, the calligraphic styles on the title slips, and the authors of the prefaces. The cover of the first volume was orange, the second was violet, and the third was azure blue. The title slip of volume one is in seal script (tensho), volume two in clerical script (reisho), and the third in semicursive, or running, script (gysho). Saish Keis (dates unknown) composed the preface in the first volume, Kikakud Eiki (18231904) for the second, and Takenoya Shujin (Okano Eitar ; dates unknown) for the third. These menall haikai masters or authors writing on miscellaneous topicsbelonged to Kysais circle. The term suiga in the title, loosely translated as drawings done while inebriated, is an appropriate appellation for a work by Kysai, who was himself a great lover of sake. No artist before him had issued an illustrated book with the word suiga in the title.

When referring to art books or albums of drawings, it was more customary to employ terms such as comic pictures (manga), as in the celebrated Hokusai manga (FSC-GR-780.233.1-14), or picture album (gafu), as in the Krin gafu (FSC-GR-780.436.1-2). Kysai used this book as a copybook for his students, and therefore it includes numerous images with the same themes and motifs encountered in Kysais paintings. This is seen, for example, in volume one with The Merrymaking of the Seven Deities of Good Fortune, Zen Master Ikky, The Courtesan Jigoku, and The Mythical Figures Long Legs and Long Arms. In volume two this includes The Six Immortal Poets, The Siege of Sma, Shki and the Demon, and Night Parade of One Hundred Demons. In volume three they are The [Seven] Deities of Good Fortune at Play, Animal Caricatures, and Yamanba and Kintar.

Numerous faked paintings are based on these themes. The Pulverer copy is most likely a first printing. The second and third volumes were never reprinted. [1] It is not known why there was a hiatus between the publication of the three volumes. Kysai released many albums in 1880 and 1881. Perhaps the publisher Matsuzaki Hanz decided not to release volume three straightaway, but he was prompted to do so with Kysais death. The item "Very Rare Kawanabe Kyosai Woodblock Print Book Hokusai Hiroshige Yoshitoshi" is in sale since Tuesday, November 30, 2021. This item is in the category "Antiques\Asian Antiques\Japan\Prints". The seller is "dogstar_rising" and is located in Astoria, New York. This item can be shipped worldwide.