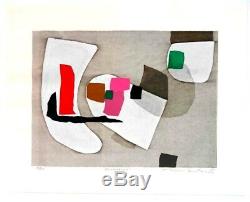 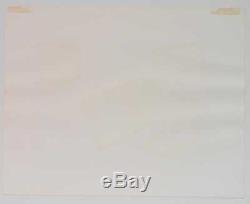 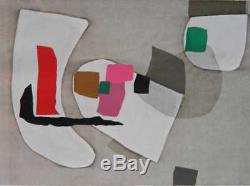 - Woodblock in color, 1967 , signed, titled and numbered 80/100 in pencil. Every once in awhile, I use my minimal Japanese expertise to shed some light on a noted Japanese artist. In this case the artist is known in Japan and his wonderful prints keep popping up around the United States but no one seems to have any information. Let me fill in the gaps with this blog on Noboru Tsurutani.

Noboru Tsurutani died at Takaoka-shimin Hospital in January of 2007. Tsurutani was an oil painter and printmaker that died of a cardial infarction. Born in 1940, he was 66 years old.

His home town was Takaoka. Tsurutani graduated from Art School in Kanazawa, Japan, after school he moved to the United States where he lived for three decades. While in New York he learned the techniques of pop silk screening. He won numerous awards for his prints and is in several museums and galleries. He won awards from the Philadelphia Exhibition Print Club and the Paris Print Biennial Exhibition.

Mr Tsurutani was also awarded 3 special prizes in the Art Prize Exhibition of Northern Japan, 2003. He served as prefecture (like a state in the US), Chairman of Federation of Movies and the Art Association President. As Art Association President, he was instrumental developing art exchanges and exhibits of international art, such as the launch of the "Art Fiesta 2006 - The Celebration of the Beauty Etchu".

He received the Prefectural Cultural Achievement Award in 2006 and was recognized for his artistic contributions to local culture by the Ministry of Education, Culture, and Sports in 1991. Tsurutani had a retrospective exhibit at the Fukumitsu Museum in 2002. The exhibit catalog recorded his experiences of studying and working in the United States. The catalog was entitled: "Memories of 40 Years Ago" which outlined his daily efforts and struggles.

He was known for his abstract paintings, his teaching skills and development of local art. He is in the following collections. Turner Collection/Print Museum - California State University, Chico. Clay Center, Avampato Discovery Museum, West Virginia. The Former Lehman Brother Collection.

Their solution was to place such objects in containers (called sagameno) hung by cords from the robes' sash (obi). The containers may be a pouch or a small woven basket, but the most popular were beautifully crafted boxes (inro), which were held shut by an ojime which were sliding beads on cords. Whatever the form of the container, the fastener that secured the cord at the top of the sash was a carved, button-like toggle called a netsuke.

Netsuke, like the inro and ojime, evolved over time from being strictly utilitarian into objects of great artistic merit and an expression of extraordinary craftsmanship. Such objects have a long history reflecting the important aspects of Japanese folklore and life. Add a map to your own listings.

Rare Noboru Tsurutani Japanese Woodblock''Retrospect'' LE numbered/signed" is in sale since Saturday, August 31, 2019. This item is in the category "Antiques\Asian Antiques\Japan\Prints". The seller is "kipi2000" and is located in Holy Land.