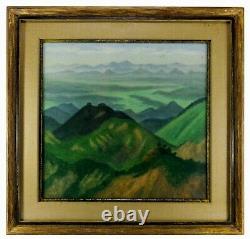 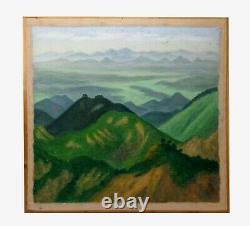 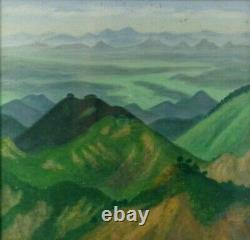 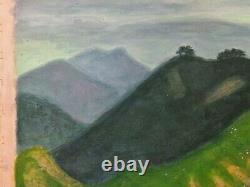 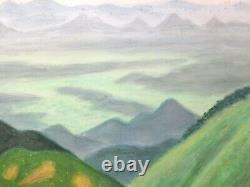 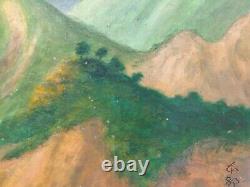 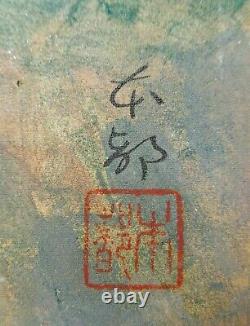 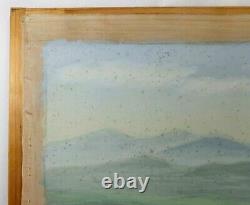 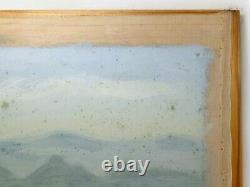 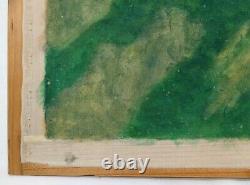 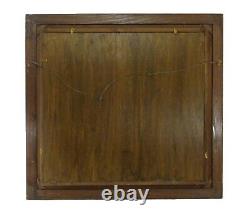 The painting is Modernist and noticeably western influenced in its overall sensibility and conceptual approach and expectedly, is framed in a period 1950's gold gilt enhanced, wide profile wooden frame with a linen cloth (grass) liner and gold gilt subliner. It's signed by the artist with a red stamp, as well as hand-written Japanese black ink calligraphy in the lower right corner of the painting. There are no stains, creases, permutations or tears. Incredible pictorial space, depth of field and the idea of the unspoiled and as of yet, unruined, virgin Japanese rural, mountain landscape, seems to be the determinitive, overriding theme.

On the heels of the carnage and destruction of the aftermath of WWII and the catastrophic consequences and lingering effects it brought to most Japanese people, this western-influenced landscape painting is a kind of reprieve or humanist visionary escape from the horrors of the present and the not-so-distant past and a kind of triumphant reclamation of everything that is right and whole, that being the natural, untouched Japanese landscape, the same landscape that existed before the catastrophe of war and which preceded all the death and large-scale destruction. The western tendency is notable, with many of the hallmarks and characteristics of western-influenced landscape painting taking hold in this particular work by its Japanese practitioner.

Really a breathtaking and quite rare Japanese hand-to-surface, one-of-a-kind landscape oil painting on fine linen. The painting appears to have been formerly stretched upon a wood stretcher but removed and laid flat for this later glass enclosed frame presentation.

It remains however, largely untouched and undisturbed. Good to Very Good overall vintage condition. There's some minor mildew spotting or slight foxing, largely found in the upper atmosphere of the painting. The painting was found under glass, which may have contributed to some degree of trapped humidity and moisture being locked underneath the glass and which allowed the plant growth (mildew) to take hold and to invasively take root and grow on the surface of the painted fine linen.

The woven fibers of the cloth are of high quality artist's linen, as it is very fine and which was used principally in European academic painting preparation. This episodes of mildew spotting are mostly mild and barely noticeable from any appreciable viewing distance away. It was taken out of frame to be inspected and have its surface gently dusted and wiped clean and to remove grime and dust from underneath the glass as well. The item "RARE MID-20TH C JAPANESE VINT OIL ON LINEN LANDSCAPE PAINTING, WithORIG FRAME/MAT" is in sale since Saturday, August 17, 2019.

This item is in the category "Art\Paintings". The seller is "modsanctuary" and is located in Milford, New Hampshire. This item can be shipped worldwide.