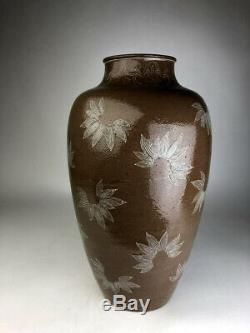 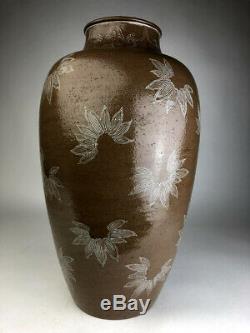 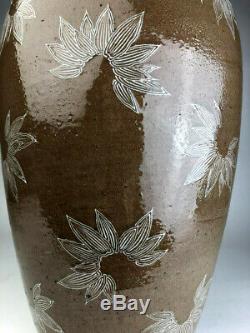 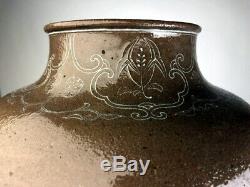 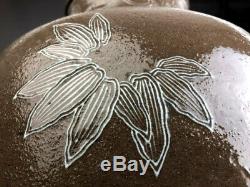 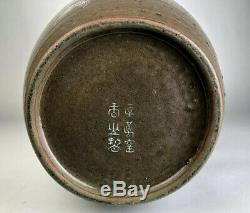 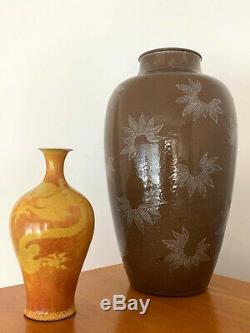 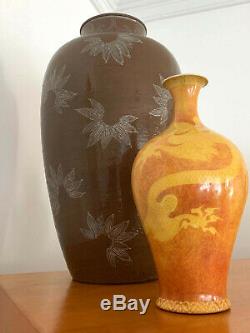 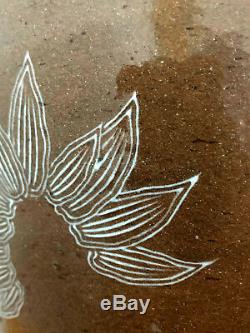 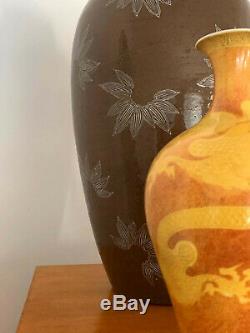 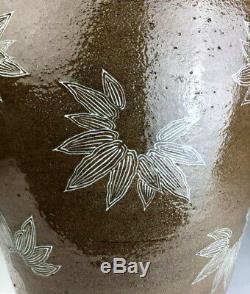 A impressively large and unusual stoneware vase in an urn shape from the studio of Japanese Potter Makuzu Kozan, also known as Miyagawa Kozan (18421916), one of the most established and collected ceramist from Meiji Period. Born as Miyagawa Toranosuke, Kozan established his pottery studio in Yokohama circa 1870s and later became one of the appointed artist to the Japanese Imperial household. His work was exhibited in many international fairs that the Meiji government participated at the turn of the century and won many grand prizes.

After achieving domestic and international fame, Makuzu retired and handed the business to his son Hanzan in 1912. He dedicated his time to other selected projects that were more in tune with Japanese sensibility than export aesthetic. He made a group of stoneware pottery pieces inspired by Edo master like Ninsei and Kenzan as well as his own poetic creation.

This piece is attributed to that period. Standing of an impressive size at 17.5" by 10.5" in dia, this vase is more like an urn, made with stoneware instead of porcelain. It was coated with a brown iron glaze with a slight translucent quality. Underglaze whit slips were used to draw low relief decoration of bamboo leaves that sparsely scatter on the surface.

Slightly more elaborate scrolling vines and autumn flowers circles under the mouth rim. Same white slip inlay was used to sign the vase under the base.

The whole effect of the piece is unusual. With its dark glaze in contrast with the sparse white decoration that is more abstract and geometric than realistic, it appears almost modern with an Art Deco flavor. For stoneware urn and vase in the similar genre by Makuzu Kozan: see figure 113 on page 182 of "Sekai ni Aisa Reta ya Kimono" MIYAGAWA KOZAN MAKUZU WARE (Pottery BOOK, Japanese Edition) Published by Kanagawa Shimbun (2010).

This item is in the category "Antiques\Asian Antiques\Japan\Vases". The seller is "gallery-t" and is located in Miami, Florida. This item can be shipped worldwide.