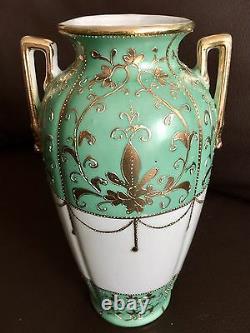 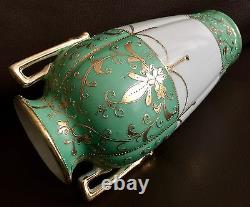 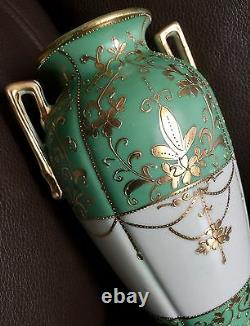 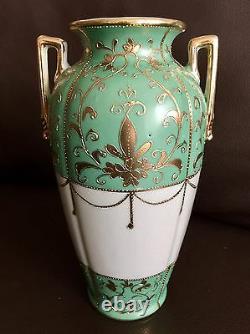 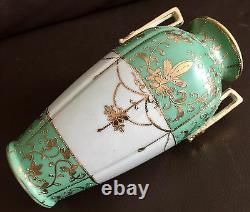 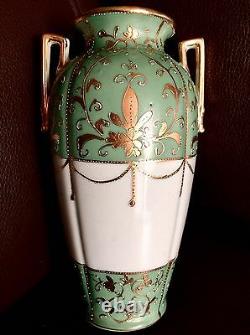 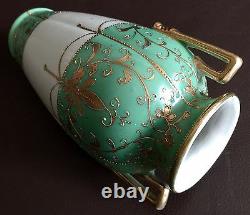 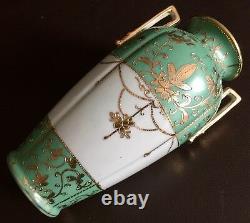 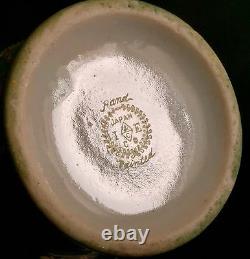 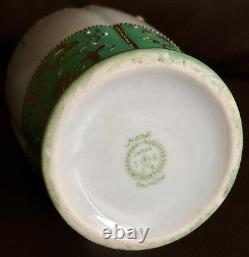 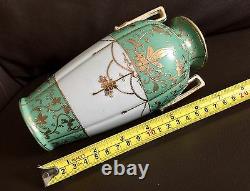 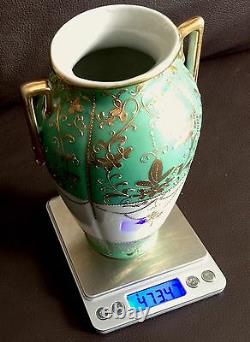 Rare Antique Nippon Era (Circa 1905) Japanese I. E & C Co 24ct Gold Gilded 7.5/19cm Moriage Porcelain Vase. A fantastic unusual antique square handled handcrafted and hand painted Japanese porcelain piece. Please browse all 12 photographs for size, weight and condition as they are self explanatory. In the19th Century, the Japanese porcelain industry underwent a major industrial revolution that allowed it to enter and then compete in the global market. E & C Co were in operation in Japan from 1885 to 1925 and as a company did not embrace the Art Deco phenomenon. They focused on Japanese techniques such as. Moriage & Icchin Moriage - (Icchin is the name of the tool used to draw moriage). Technique to make ceramics three-dimensional. Gold Raised Work After the first firing of a painted piece the moriage is covered by painting it with liquid gold giving a raised gold look. Gold Beading - when small gold dots are placed carefully and precisely on the moriage. Raised Enamel (Jewels) A technique to enhance a gold finish to make it more luxurious. Wedgwood refers to Nippon pieces which attempt to imitate Josiah Wedgwoods Jasperware. Sprig Mold - A one-piece mold used in making ornamentation. Art Deco design has been influenced by such concepts as European Cubism, Russian Construc- tivism, German Bauhaus, Italian Futurism and adaptations of designs from ancient Egypt, Africa and the Orient. Porcelain bearing the IE&C mark spans a period of time inclusive of what Nippon collectors like to refer to as pre-Nippon, Nippon and post-Nippon. To be precise, a timeline of approximately 40 years from 1885 to 1925. I E & C items tend to be Art Nouveau but non-typical when compared to the majority of Nippon era export items destined for North America. Japan, as country of origin, was originally used and maintained by the firm because the product was not intended for the American market. I E&C items were primarily Nippon era, circa 1915, destined for non-United States markets. I E & C Co. Choose not to change from Japan to Nippon. The porcelain produced by IE&C has been shown to be indicative ofearly period works (1885/1905) characterized by an ashen colour and decorated extremely painstakingly, with elaborate, exquisite skill and refinement. Items presented by IE&C are all heavily influenced by the Art Nouveau style of decoration and none of the export wares were appreciated or valued by the Japanese, as it was tailor-made for Western taste and quite alien to their own taste. The Nippon era began in 1891 when the Japanese porcelain was clearly marked "Nippon" due to the McKinley Tariff Act. This act required that all porcelain be marked with the country of origin. "Nippon" literally translates to "Japan". This porcelain was made specifically to be exported to the west with designs and patterns that suited American's tastes.

At that time, Japan had a thriving porcelain industry using methods used in Europe and the United States. In1921 the United States government changed its position and required that Japanese imports no longer be marked "Nippon", but with "Japan". This marks the end of the Nippon era.

The item "Rare Antique Nippon Era (c1905) Japanese I. E & C Co 7.5/19cm Porcelain Vase" is in sale since Thursday, August 30, 2018. This item is in the category "Pottery, Porcelain & Glass\Porcelain/China\Noritake/Nipponware".

The seller is "santoor-uk" and is located in Salford, Greater Manchester. This item can be shipped worldwide.