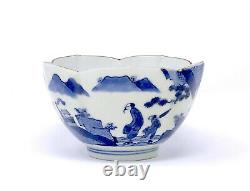 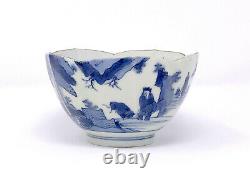 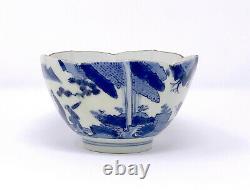 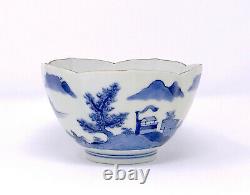 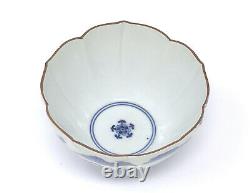 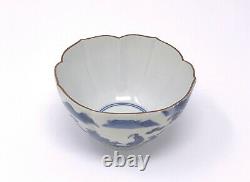 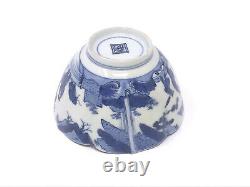 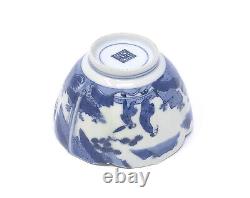 A VERY FINE & RARE 17TH C ARITA AI-KAKIEMON (Blue Kakiemon) LOTUS BOWL'SCHEVENINGEN' VAN FRIJTOM C1690. The only other recorded example of this large-sized deep lotus bowl is in the collection of Burghley House, Stamford, where it has remained since the early 18th century. Lang references Soame Jenyns, noting that in many respects the present example follows those pieces specifically ordered by the Dutch East India traders and which almost certainly utilized designs drawn up in Holland. The figures are reminiscent of those found on contemporary Chinese blue and white export ware even though seen indirectly through the eyes of a Western draughtsman. The mean leading the animal is very close in feeling to similar subjects found on the so-called'Deshima Island' dishes, and furthermore the method of contouring the rocks by means of a series of dashes is also to be seen on these latter dishes.

Barry Davies Oriental Art "Ko-Imari Porcelain from the Collection of Oliver Impey" (1997), p. The item "FINE & RARE 17TH C ARITA AI KAKIEMON LOTUS BOWL SCHEVENINGEN VAN FRIJTOM C1690" is in sale since Thursday, April 22, 2021. This item is in the category "Antiques\Asian Antiques\Japan\Bowls". The seller is "bhfineart" and is located in Toronto, Ontario. This item can be shipped worldwide.